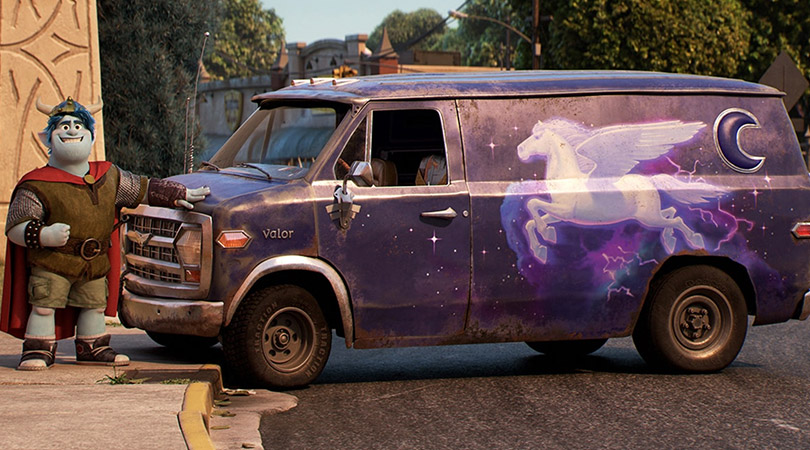 The team behind Disney and Pixar’s Onward goes behind-the-scenes on the making of the film.

In Disney and Pixar’s newest film, Onward, audiences join teen brothers Ian and Barley as they embark on a quest to reunite with their dad, whom they lost at a young age. Like any great Disney and Pixar movie, this film has a great cast (including Chris Pratt and Tom Holland, just to name a few!) and is full of heart, humor, and compelling characters. As if that weren’t enough, here are four more things to look forward to when the film arrives in theaters on March 6!

A World Blending the Fantastic with the Familiar

From a Monster world hidden just behind our closets to a kitchen in Paris, Pixar films taken place in some pretty interesting locations. Onward, which is set in a suburban fantasy world, is no exception.

For the filmmakers on Onward, placing the film in this setting helped them create a space where there could be both possibility and scarcity, fantasy yet also familiarity. A world where, through magic, Dad could potentially come back — but also a world in which that magic would not necessarily be easy to produce. “If we had other people who knew magic in the world, Ian and Barley could easily just go down the street and ask that person to fix Dad for them, but we knew we couldn’t do that because we knew we needed the characters on the journey,” shared production designer Noah Klocek.

After several iterations, the team refined that suburban fantasy world even further, eventually settling on a style that was 70% familiar and 30% fantastic. Oftentimes, the 30% was easy to achieve, as the team soon realized that by simply placing an elf or a troll in a scene, they would instantly meet that threshold. It was balancing that out with the familiar that proved to be more difficult. To get inspiration for the familiar, the team took a research trip to Los Angeles, where they surveyed houses in the neighborhoods of Los Feliz and Frogtown and also looked at everyday mundanities like parking lots and power lines.

Magic Unlike Anything You’ve Seen Before!

Another major challenge for the team was determining exactly what magic would look like in the film. We’ve all seen many a fantasy film with magical elements in the past, but how do you craft a version of magic that can both fit the tone of your tale and also be completely unique to your film?

It takes a brave soul to embark on such a quest, and luckily Pixar’s internal club The Fellowship (consisting of fantasy geeks throughout the company) were the perfect people for the task. Together with director Dan Scanlon, they determined the three essential components of a spell:

Using these components as a guide, the team was then able to move on to more features of the magic, like what a spell should be named and what magic should look like. When it came to the look, the team considered many factors, including the color of the magic, how one’s confidence can affect the shape and style of the magic, and how much space a piece of magic should take up on the screen — which came together to create the final version seen in the trailers.

Pixar is famous for their incredible Easter eggs, and Onward is no exception. Look closely while watching the film and you just might spot a troll or two or three, or nearly one in every frame! How did these trolls end up there? You can thank the Crowds team for that!

On an animated film, it’s the Crowds team’s job to populate and animate the background characters of a shot. For Onward, these included everything from elves to satyrs to goblins. The magical species that was exceptionally hard for them place were the trolls. Animation Crowds Supervisor Sequoia Blankenship shared, “When we’d put a troll in a shot, it’d be so big that it would immediately suck up all the visual oxygen of the scene.” Determined to find a way to still incorporate trolls as background characters, the team took it upon themselves to not only find the right places for the trolls in scenes with lots of characters, but also the right place for trolls in every scene. Voila! An Easter egg is born!

And of Course, Awesome Animation

One of the great challenges but also great opportunities of animating Onward was determining the movements of several characters that don’t exist in our real world, like a person missing a top half, or the part-horse, part-man centaur. In these cases, the animators really had to think outside the box and use their imaginations to craft movements that felt fantastic, but not outside the realm of familiarity.

The character of Dad offered that perfect challenge. “With Dad, we really had to ask ourselves, how can pants communicate and express emotion?” shared directing animator Allison Rutland. Before the actual animation even began, the animators did several green screen tests with Scanlon to test how a pair of pants would do things like sit down, be pulled by a leash, or perhaps even do a high-five. (For that, a leg would lift to tap a hand.) The flop of Dad’s top half offered the perfect jumping-off point for scenes where they needed Dad to show a bit of sass and attitude for comedic effect. In contrast, more subtle elements like foot tapping ended up becoming effective tools for Dad to connect in heart-to-heart moments with his sons. Combine all those elements together and you’ve got a character who can be both funny, sincere, and have a true personality — and do it all as pants. In short, the power of animation!

Making a movie, let alone an animated movie, requires a lot of people to work together among a lot of moving parts. Yet when those parts come together in just the right way, it can be pure magic! Experience that magic first-hand when Onward comes to theatres March 6.